Home » HABITAT » Habitat diversity » Daisyworld
Back to Category Overview
Total images in all categories: 11,921
Total number of hits on all images: 7,169,180 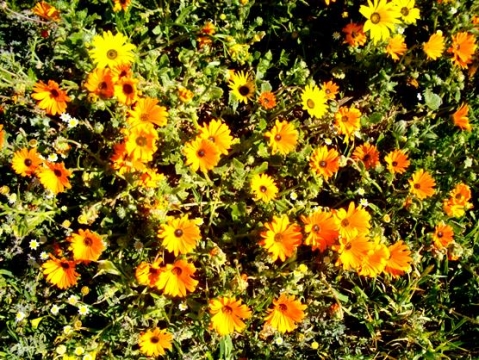 Are these daisies becoming lighter coloured over time as global warming impacts on the earth?

Daisyworld, a theory proposed by James Lovelock (and others) as part of his Gaia Hypothesis predicted darker coloured daisies to predominate in a world that cools down when heat and light are absorbed rather than reflected; paler ones when temperatures increase and excess heat is best reflected.

Competition between the variously coloured daisies would bring about a balance in the populations favouring a planetary temperature near the optimum for daisy growth at every given time. People may lack the longevity to recognise the change during a lifetime; or not.

So, if you see darker daisies proliferating, buy a coat. Language confusion in the global warming or climate change debate reminds of the builders at Babel. Myth and history, theory and proof bubble together in the pot of ignorance stirred by spin doctors. The short-sighted empiricist disbelieves everything not happening before his eyes, while Plato doubted what his eyes told him.