Home » HABITAT » Habitat diversity » Cocktail ant nest 1 m above the ground
Back to Category Overview
Total images in all categories: 11,506
Total number of hits on all images: 6,493,915 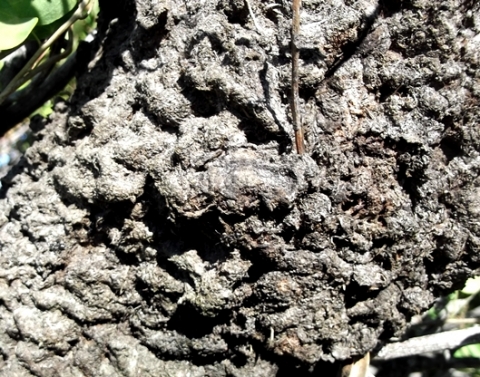 A close-up of the wall of a Crematogaster or cocktail ant tree house shows the paper maché-like texture of the chewed bark building material. The salivary secretions of the ants serve as cement, often giving the nest a dark colour.

The cocktail ant name is earned from their habit of turning up the tail into an erect position when alarmed, maybe as a warning. The resemblance to a cocktail glass surely way beyond ant imagination.

The back part of the body or abdomen is distinctively heart-shaped, bringing these ants another common name of Saint Valentine ant. Gaster is a Greek word for stomach, while cremare means to burn in Latin. The notable abdominal part of the Crematogaster ant is an obvious name-giver, the significance of burning not so much.

Unless the remarkable and yet unexplained survival of fire by Crematogaster ants brought that on. Fynbos and other veld fires would conceivably be survived by ants in underground shelter, but these tree-dwellers have a fire management system worth exploring.

Cocktail ants are sometimes also known as acrobat ants, maybe on account of their feats in extreme architecture: large nests up in the branches, swinging about in the wind. They are mostly found in forests, woodland and shrubby environments, most of the species occurring in the tropics.

The last word on ants and their diverse doings has not been written and probably never will be. There is an estimated 30 000 ant species on earth, 12 500 of them described scientifically so far. Ant anatomy adapted according to the tasks they perform in the colony including feeding, reproduction, housing, defence and many other lifestyle components is uniquely evolved for coping in the ecology that shaped the species interactively along its journey through natural selection.

Diversification of a species goes on as long as the will to live tackles more challenges, allowing nature to accumulate more history (Holm, 2008; Wikipedia; https://antsofthecape.blogspot.co.za).