Home » HABITAT » Habitat diversity » Crassula muscosa, a plant found throughout southern Africa
Back to Category Overview
Total images in all categories: 12,086
Total number of hits on all images: 7,381,209 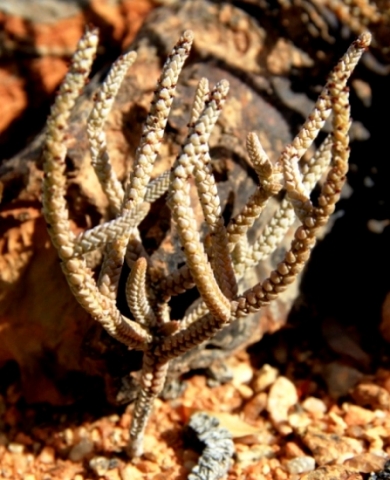 Crassula muscosa is so widely distributed that just about every South African might find it in the veld of his or her local neighbourhood.

That is, if there is still some veld left nearby to stroll in and enjoy nature. Undisturbed natural vegetation is continually being reduced by both grossly intrusive and insidious, hardly noticed forms of human impact. Even the pristine parts of nature we value most, may already include unnoticed modifications that we are just not skilled enough to recognise. Our ancestors from before the Industrial Revolution had more hardship, but a prettier world to look at.

Our stay on earth is relatively short, our footprint unfortunately more indelible and increasing. Every generation compounds the destruction, in spite of good intentions and so many learned conferences. But nature waits! It has outlasted many species with much more longevity than humans, e.g. dinosaurs 160 million years, humanity 1 to 2 million years, its brain capacity fully developed in only a fraction of that period.

As long as humanity remains obstinately blind to human population growth as the root cause of environment deterioration and climate change, our corrective measures will remain cosmetic.

C. muscosa is one of the easy plants to grow from small pieces of stem. The plant could never multiply as effectively as people; cannot spread as pervasively as the human population multiplies these days. Plants and animals have only their own bodies to use in propagation and survival.

Humanity on the other hand, has modified the habitable environment into one huge home for itself, the rest increasingly transformed into a comfort zone and playground. All else that lives is squeezed out into marginal existence where and when it pleases humanity to be so kind. Every successive generation of people, since mass production and massive human population growth arrived with the Industrial Revolution, has fewer options for controlling its own viral escalation.

Look at the plants and animals and enjoy them! For each generation of people now sees less of Nature as she used to be before the brain became the bane of all that lives (Manning, 2007; Vlok and Schutte-Vlok, 2010; Bond and Goldblatt, 1984).