Home » HABITAT » Habitat diversity » Colour symphony by unrelated species
Back to Category Overview
Total images in all categories: 11,411
Total number of hits on all images: 6,178,535 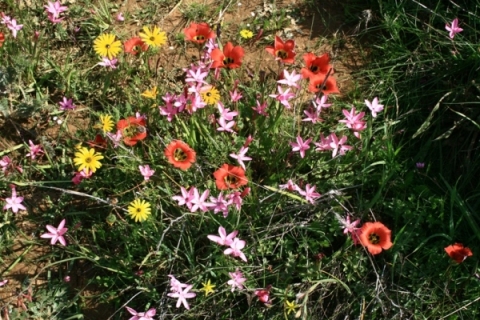 When diverse annual plants grow to the same height in dense stands and flower simultaneously, they compete and cooperate in the same spirit as business people that talk about coopetition with their opposition. Competition still means that every participant must "stand on its own feet" and do the basics for securing its share of sun, water and nutrients. Cooperation makes them share the feeding of passing grazer animals with everybody sacrificing a leaf or two, nobody gets eaten totally, hopefully not too many get trampled into oblivion. They share pollinators, covering the soil together, cooling it, conserving moisture and bending in the wind together. Together their remains will form mulch for another generation of plants and later their molecules may meet in another living entity.

Society is a survival resource for all with the capacity of benefiting from it, helping to sustain it. The whole survives, the individual members serve their time and disappear into the endless cycle, serving in their neighbourhood or further afield. Entropy does not keep records.

The brains of many bring solutions and problems for human society, harmonious or not.  Nature, however, achieves "management solutions" or the art of the possible by trying the chance possibilities. Many individuals are sacrificed in natural experimentation within the multiplying and disappearing species, all evolving. Individuals that perish are normal wastage, serve the greater good and a longer game played collectively. Every individual tries as hard as possible to survive, otherwise the system doesn't work. The individual's survival victory becomes the species' next building block.

Chance is everyone's fate. The species survives after losing countless members along the way, until a sufficient number of trials have been completed to bring a breakthrough for those that fit. The consolation of the species surviving does not reach the sacrificial discards. Nothing gives up, all just keep doing their thing! Statistics and probability are all over evolution. Meaning? Live as hard as possible, that's all! Problems if you are human though. A problem species.

Humans don't mourn their own body cells, thousands of them, that die and are replaced continually. Similarly a living species does not mourn (or praise) its dying specimens that served species survival. Monuments only clutter the countryside. The service of the individual in the nth species lies in doing what its nature allows and determines, surviving as best it can in accordance with its specific abilities. Humanity's aspiration to higher service produced by its evolved flagship feature of a brain, is still the same as that of the dandelion or rabbit. That is what made dying in war so honourable in the days of the heroes.