Home » HABITAT » Habitat diversity » Colony of Erythrina zeyheri after a grass-fire
Back to Category Overview
Total images in all categories: 11,411
Total number of hits on all images: 6,178,336 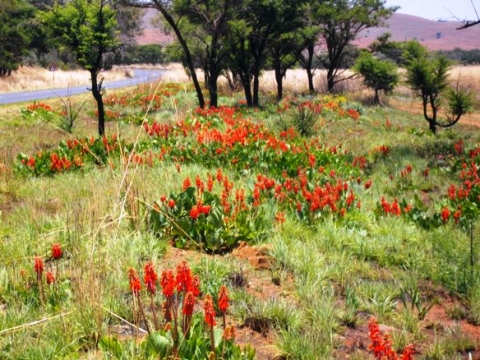 The name ploegbreker (Afrikaans) is earned by the tradition of damage caused by the formidable tuberous rootstock to farmers’ ploughs, not expected from the looks of the apparently innocuous shrublet. Often only a very small part of the stem is visible above ground-level, with the unyielding surprise lying in wait for the digger who ventures below.

This well-known stand of this attractive flowering plant is found in its normal open grassland habitat by the side of the Middelburg-Stofberg road in Mpumalanga near the Blinkwater Mill. It has been established here for many years, noticed by the less hurried passing motorists, especially in years when winter grass-fire has exposes the flowers, as it did in October 2010.

On the opposite side of the road where no fire occurred this year, the many diligent little plough-breakers are flowering almost unseen in the tall grass.