Home » HABITAT » Habitat diversity » Sandstone sheet matrix
Back to Category Overview
Total images in all categories: 12,081
Total number of hits on all images: 7,379,236 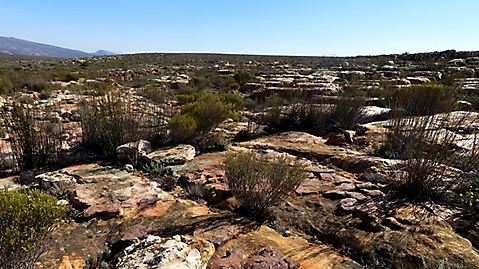 This vegetation tells a story of stoical fortitude, of life on the edge. It is sparse but enduring, rich in understated achievement but impressive nevertheless.

Exposed sheets of sedimentary sandstone are being and have been slowly eroded by the elements for a very long time. Successive generations of plant roots find and found their ways into the slow-growing cracks and crevices to eke out a life. Penetration by offspring exceeds that of ancestors, the drilling and cracking a continual to continuous endeavour.

Rock destruction is the building exercise of a plant home, a vegetation domain, pioneered by the plants' early ancestors, although not by them alone. Apart from the contribution by the elements, nobody will ever know how many disappeared, anonymous, predecessor plant species with leaves, flowers and fruits no longer seen here, have contributed to leaving the collective mark on the land. Although extinct, much of their bodily leftovers, reused in atom and molecule form by later plants many times, are present in the plants in picture and the soil that feeds them.

Coarse grains of quartz and several other minerals mix with the plant detritus and microorganism inhabitants to establish a particular soil type. This accumulates in the lowdown gaps where the rock gives way, moistened occasionally by winter rain.

Collective action by countless living and dead contributors resulted in this matrix-like ecological phenomenon. Its narrow tentacles hemmed in and shaped by hard rock patches, has become a remarkable Cederberg veld type. The photo was taken at Kagga Kamma.

What flowered here in recent seasons, albeit modest, left seeds that responded and will respond to bring about a brave, enduring plant community. Defiant though sparse, resilient though delicate, there is no flinching in the face of the extremes sure to challenge (Norman and Whitfield, 2006).