Home » HABITAT » Habitat diversity » Colour
Back to Category Overview
Total images in all categories: 12,068
Total number of hits on all images: 7,363,052 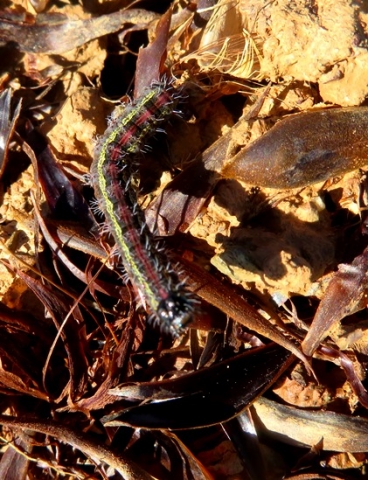 Colour in nature allows for the opposites of hiding and flaunting, living undercover or centre stage. Camouflage or blending with background like wearing leaf-mimic wings prevents being eaten, while ostentation overcomes sexual barriers as in the potent peacock. Appearing sexy in nature means the subjective probability of effective procreation: If he’s got what it takes, I’m convinced.

Changing tack to hunt or hide is done quickly as by the chameleon, more slowly through metamorphosis in insects and amphibians. This requires adults to produce many eggs or babies for feeding some neighbourhood masses as well as surviving as a species. There are thus times for colourless cringing and other times for hard marketing in insect biblical terms.

Colourful mimicry for masquerading as something else deceives and warns other species to move away or perform services, such as pollination. Startling predators is also done by flashes of colour.

Thus colour serves in the world where the significant other species have sight. Seeing the world as they do is not the aim. Eliciting the desired behaviour from them is what’s important. Making them do what you want, whichever way they may see and interpret your place in the world.

Colour also has functions not relating to the other species of one's ecological society: Skin colour prevents sunburn in some. Changes in skin colour regulate temperature in for instance frogs.

When you look in the mirror, the colours you see had something to do with the survival success of some distant ancestry, human or before, ensuring your chance of gazing at your image today (Wikipedia).