Home » HABITAT » Habitat diversity » Brunsvigia bulbs under stones
Back to Category Overview
Total images in all categories: 11,506
Total number of hits on all images: 6,493,793 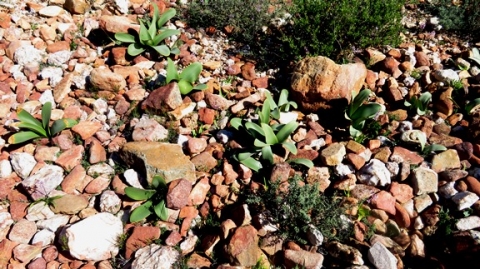 Red-rimmed Brunsvigia leaves emerging at the end of winter from a heavy stone covering in Namaqualand seem odd. Why grow like this among the stones?

For one, the stones may cool the ground for bulb and root protection where the summers are so hot. Secondly, some digging animals might feed on the bulbs were they more accessible.

But Brunsvigia plant parts are mostly poisonous and distasteful, so maybe animals might avoid them. On the other hand, animal adaptation has diversified to eat whatever the majority shuns. Niches of capitalising on unused and underused materials produced by nature and remotely edible, will be filled. For survival probability increases where competition is less brisk.

If you’re not competitive, crave something nobody wants. And don't tell anyone. "They" will learn anyway, for the living world is observationally obsessed. And acquisitive with no respect for private property. Everything is tried by someone. Taking resources and another's personal space are not theft in nature.

The trick is to safeguard one's new niche by a high threshold to entry. Keep the competition out until one is ready for the next move forward. The evolutionary life of a species is like the Dakar Rally. It only appears slow. Nature has time, moving forward by making things die, letting their offspring live, wherever they can. In nature, death is a functional necessity for making life safe for species. Or what is to become of them as even species are temporary, albeit less so than individuals.

So, there may be animals that eat Brunsvigia bulbs in spite of their toxicity or taste. Like black rhinos eat tamboti leaves and twigs, while people get sick from even using tamboti wood on their braai or barbeque fire. Every living entity has to adapt or die as challenges involving conditions and competition change.

The brunsvigias have adapted by adopting the tumbleweed solution for seed dispersal. This naturally evolved plant “technology” (without patent) means firstly that above-ground plant parts dry out when the seed is ripe. Secondly, severance occurs from the root ties, freeing the sacrificed plant structure to be blown away. Less stately than a sailing ship of old, it starts rolling away merrily on every gust of wind, bouncing over stones and plants as it goes.

Being rounded and light, tumbleweed rolling may be fast and far, depending on conditions. The third part of the plan is for seeds to drop out gradually as follicle walls break. Random landings make the seeds take their chances in unknown territory, instantaneously becoming settlers or squatters on new land without fear or conscience. There are many types of tumbleweed plants on earth in steppe and arid country where the land is flat and open.

One South African tumbleweed genus is Brunsvigia. Their inflorescence design, a globular umbel with every small, lily-like flower on a long, spoke-like pedicel, works perfectly. The umbel peduncle breaks free when the seeds are nearly ripe, intact in their follicles with tickets to ride. The fruit pedicels remain in position to keep the structure spherical, although creaking.

As the seed follicles become dry and brittle, they break gradually. Seeds spill out in instalments, dispersed as well as can be desired. Add a computer and a Mars or moon robotic vehicle could one day sow vegetable seeds nearly as efficiently (Duncan, et al, 2016; Wikipedia).