Home » HABITAT » Habitat diversity » Leopard tortoise carapace
Back to Category Overview
Total images in all categories: 12,087
Total number of hits on all images: 7,393,080 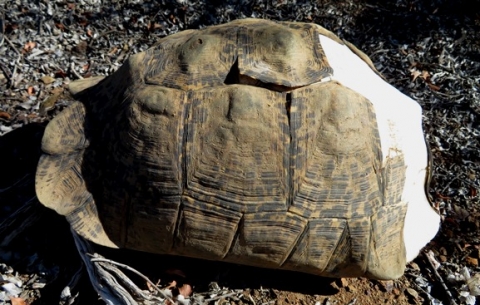 Deterioration of the shell of a leopard tortoise that has reached the end of its lumbering journey on earth reminds of the cycle of re-use of biological material in the ecology. This one reached its final resting place on the farm Minwater in the Little Karoo.

Very unlikely that the remains of this Stigmochelys pardalis, in Afrikaans the bergskilpad, will directly benefit an animal by the same name after this stint. There are simply too many species competing for the useful molecules, mostly already freed for absorption into their next adventure of supporting life somewhere. What was a "tortoise molecule" here may long ago have served a dinosaur and over time thousands of species, apart from roaming free as an independant many times.

The large, attractively marked and steeply domed carapace (or dorsal shell) becomes about 40 cm long, but is geographically variable in size. It has a yellowish straw colour with diversely shaped dark to black markings in each of the 13 patches on its back. With age they become almost uniformly brown. The animal may weigh up to 13 kilograms from grazing, hence its prevalence in grassland. In the Karoo succulents will do.

The name tortoise comes from the Latin word tortus, meaning twisted, referring to the twisted legs that have five claws on front feet and four on the back ones. But the Romans called a tortoise a testudo from testa meaning shield, referring to the shell.

Leopard tortoises live in Africa from the Sudan to the southern Cape, the only member of this monotypic genus of shield reptiles.

The species favours semi-arid, thorny and especially grassland habitats, but, yes, it can swim. In extreme weather these tortoises may dwell in abandoned jackal or aardvark holes, as they only dig themselves to furnish ground nests for laying their eggs.

The species is not considered to be threatened in its habitat early in the twenty first century (Riëtte, 2016; Wikipedia; www.iucnredlist.org).