Home » HABITAT » Habitat diversity » Baboon spider
Back to Category Overview
Total images in all categories: 11,411
Total number of hits on all images: 6,178,321 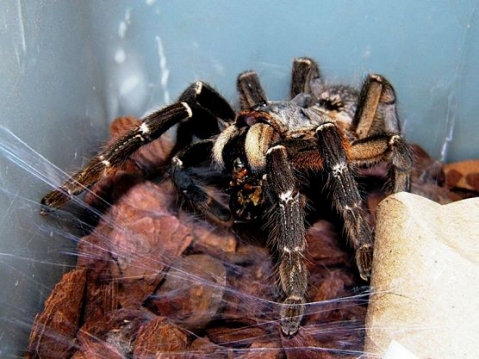 Baboon spiders are venomous ground-dwellers of Africa. A local subfamily of the tarantulas, the bite from their fangs is painful or itchy for a few days, usually not more serious than that. The feeling is bad when considering that the black fangs may exceed 1 cm in length.

The common name is earned by general hairiness and the padded feet resembling baboon fingers. These spiders are found, often unexpectedly near a bush in the veld, not so much in gardens. They occur in many diverse habitats like scrubland, grassland and bushveld, their ecologies in many cases still poorly known.

Baboon spiders eat enthusiastically, their diet varied, therefore healthy. It includes beetles, cockroaches, small rodents, lizards and more, depending on what comes near, especially at night.

Attention is sure to be focussed when facing a baboon spider of 15 cm raising its front legs. (The king baboon spider of East Africa has a 20 cm leg span.) Some baboon spiders can also stridulate, i.e. rub certain body parts together for producing a sound spelling belligerence, serving to intimidate. In the case of baboon spiders these parts are the jointed femurs of some legs producing a hissing sound; they have, of course, spare legs to stand on while others hiss.

These warning signs indicate that a bite may be imminent for overpowering a suitably sized prey or defending against all comers, size not an issue.