Home » HABITAT » Habitat diversity » Baboon spider with kids
Back to Category Overview
Total images in all categories: 11,632
Total number of hits on all images: 6,749,738 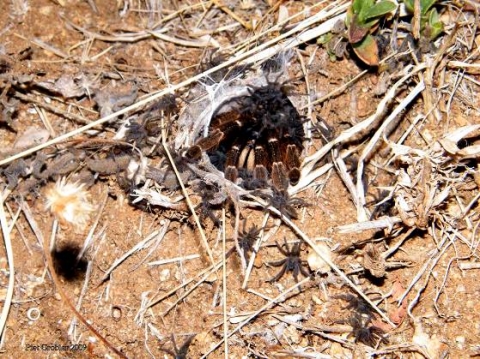 The female baboon spider builds a silk-lined burrow or scrape under debris or rocks, often near the surface; the males roam to find them. Some have strong back legs used in the burrowing, while fangs are also used.

Some kinds of baboon spiders take ten years to mature, while some of the females become thirty years old, moulting periodically as she grows. Their men do not live that long, maybe a lifestyle related phenomenon as vagrancy over silky boudoirs in a dangerous world doesn’t make for longevity. Out there in the big wide world baboon spiders are eaten by birds, centipedes, lizards, chameleons, honey badgers, bats, mice and baboons.

Mating usually take place in spring and summer, after the first rain. The male has to transfer sperm from the genital opening under the abdomen to secondary sexual organs where it is stored until mating. The male baboon spider taps rhythmically on the ground or against the sides of the burrow until the female decides to appear.

The jaws of the female are forced to open by the strong mating spines on the front legs of the male in an act that may not be considered consensual by the courts. This force is used to prevent the male from being attacked by his partner during the mating act. He may get eaten afterwards though, a fact that does not deter any right-minded baboon spider male, as mature males tend to live only for six months or so anyway if not eaten by the wife.

The female lays 30 to 180 eggs, but few babies live the seven to ten years to maturity. Even the baby baboon spider can bite (Wikipedia; https://www.sanbi.org; http://www.krugerpark.co.za; https://www.bca.org.za; www.africansnakebiteinstitute.com).