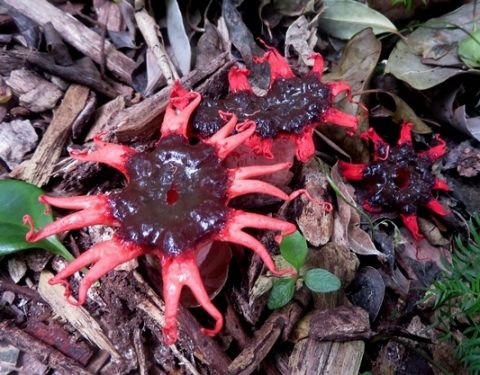 The Aseroe rubra fungus starts off as a partly buried, whitish ovoid structure of about 3 cm in diameter, or a cluster of them.

The gelatinous, egg-like sac bursts open, growing a hollow cylinder which becomes the white stalk at the base of the flat-topped fungus. Six to ten red, pink or orange arms emerge laterally in a ring or star-shape around the flat top. The body reaches a height of 10 cm, its arms radiating out horizontally to 3,5 cm in length.

The picture shows some colour variations. The flattish arms are deeply divided into paired limbs that taper to thin, curling tips, incised from above to below halfway up the arm.

On top in the centre, the fungus is covered in dark, olive-brown, shiny slime, the spore-bearing gleba, which smells of rotting meat or similarly stinky alternatives. There is a cup-shaped volva common to mushroom fungi at the base of the hollow stem, the remnants of the original egg.

A mushroom's volva is often partially or completely buried in the ground but an important component of identification for distinguishing between edible and poisonous mushrooms (Wikipedia; https://australianfungi.blogspot.com; www.mushroomexpert.com).