Home » HABITAT » Habitat diversity » Aseroe rubra
Back to Category Overview
Total images in all categories: 12,082
Total number of hits on all images: 7,379,636 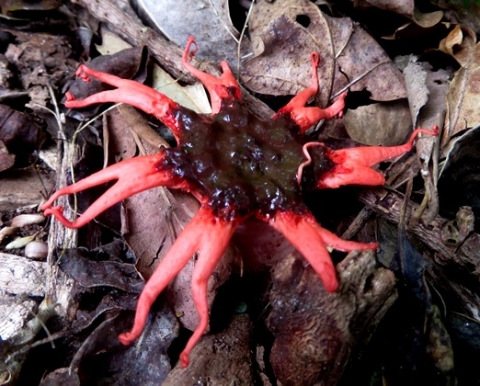 Aseroe rubra, commonly known as the anemone stinkhorn, is a widespread, short-lived fungus. It is called anemone, sometimes particularly sea anemone on account of the resemblance of the mature shape. There is a stinkhorn family called Phallaceae in fungus world, this colourful specimen a member.

The species is saprobic, i.e. it feeds on decayed organic matter, forming part of decomposition in the carbon cycle.

The stinkhorn part of the name refers to the foul, carrion smell of the central, brown slime patch on top producing the spores that attracts flies. This ideal landing spot or fly airport is mounted upon a notable stem that will do as a horn.

Flies ingest and trample the spores, serving to spread them. The generic name, Aseroe is derived from the Greek words ase meaning disgust and roe meaning juice, referring to the smelly fungus attributes. The Latin word ruber means red.

The species is widespread in parts of Australia and some Pacific islands including New Zealand and Hawaii; also occurring in parts of the USA, Britain and elsewhere. Its presence in South Africa in areas away from gardens is yet unexplained but will possibly end up not surprising in terms of how such events tend to take place. There is also a stinkhorn variety in India.

These fungi are found in grassland, among woodchips or mulch in grassy areas and some woodlands, also in gardens and on lawns. The photo was taken under trees in the uncultivated part of Kirstenbosch during November, a shaded area near water where much organic material formed natural mulch (Wikipedia; https://australianfungi.blogspot.com; www.mushroomexpert.com).