Home » HABITAT » Habitat diversity » Architects of insect world
Back to Category Overview
Total images in all categories: 11,523
Total number of hits on all images: 6,605,233 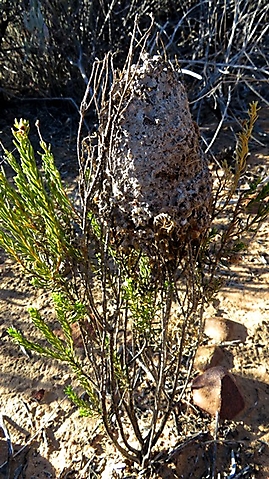 Crematogaster or cocktail ant nests count among the housing construction wonders of insect world. Besides humans, insects are the animals that change the environment most to suit their purposes.

As long ago as 400 million years to 350 million years ago insects started developing and proving their resilience and ingenuity, much beyond any other grouping of animals on earth. Myrmecology is the branch of entomology that deals with ants of all kinds and their antics; myrmex being the Greek word for ant.

Apart from ants, the feats of construction achieved by insects all sorts are almost endless. Untold numbers of insects tunnel the earth. We don’t know how many kinds or how they all operate, because most insects species have not yet been studied. The various branches of entomology are geared for this, waiting for more qualified practitioners and funds.

There is still enough world to explore, scientific frontiers to pioneer for anyone wanting to be the first over a personal, pristine border. Nobody has to weep like Alexander the Great about the absence of more worlds to conquer.

Termites of many sorts are known for their clay castles and domes, cemented with spit and completed with chimney or spout air conditioning and fungal farms or food factories. Mole crickets (Gryllotalpidae) also construct spout-shaped tunnel exits for their homes with precisely contrived acoustics to please their lovers musically when they stridulate.

Above-ground clay nests built by insects are manifold, including all those made by wasps and others from the Hymenoptera order of membranous wing insects.

Many insects including silkworms (and also the arachnoids) build nests or webs of silk they produce themselves. Some, such as Psychidae or bagworms carry these nests around as protective clothing. Others, like certain Trichoptera or aquatic insects catch food from water, using their sieve-like silk nests as nets. Then there are the communal, green leaf-nests held together by silk spun by weaver ants (Oecophylla smaragdina), a species of arboreal ant found in Asia and Australia.

And if you can’t produce silk from your body, you might still secrete wax or lacquer, as the scale insects or Coccidae do, crafting a weird form of housing.

Some insects eat their way into a home by tunnelling into wood (many kinds of wood borers), seed borers (similar deeds, different damage) or leaf miners (unloved grunts condemned as garden pests for defacing pretty plants and vegetables).

Some insects produce chemical or pharmaceutical effects. They sinthesise chemical substances in their bodies and invade plant tissue, eating or biting their way in. The organic substances are deposited wherever they choose, or automatically wherever they go, causing the formation of galls on stems and leaves. The gall appearance presumably depends on the chemistry the insect species is capable of, the plant species invaded and maybe conditions prevailing. The galls, sometimes appearing like strange fruits, serve the insect or its offspring as food and housing.

People really don't know half about housing on earth, let alone in the world (Holm, 2008; Wikipedia).