Home » HABITAT » Habitat diversity » Aloidendron, rock, stones and sand
Back to Category Overview
Total images in all categories: 11,411
Total number of hits on all images: 6,178,561 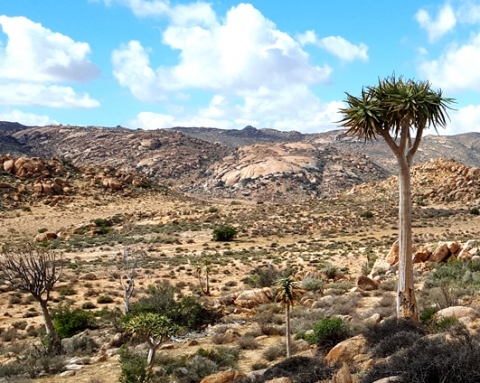 Vegetation covers ground where and when weather permits. Otherwise the naked earth waits for clouds to perform greening rites. Rocks still serve in some places as a kind of primitive earth clothing, the protruding tips of early earth substance and its deeper nature. The continuous upper rock masses connect to the mother body’s inner parts, reminding all life on the surface that it lives on the rocks and borrowed time.

Broken-off bits of rock are relegated to stone status. Stones have a future in proliferation. They continually reduce in size, enjoying a meaningful existence of multiplying into smaller stones, whether they’re thrown or not. Continual self-destruction of this inorganic component on the earth’s surface ends in a sandy destination.

Soil is the compromise sand makes with leftovers of the living. It houses micro-forms of less seen life, as well as an endless assortment of roots for ensuring the leafy land covering above-ground.

The voluminous and diverse soil content of the earth’s surface has to add dead bodies continually for more and better plant clothes for earth itself. This happens when seed and water are added. Leftovers serve the soil in continuously facilitating life.

The more plants and animals do their thing and die as they should, the faster the soil content increases, becoming a richer mix, better capable of fulfilling its purpose. Impassively drifting and turning in space according to plan, the earth's green land covering and blue ocean coat are the highlights of its looks. Concerned with its cover, the earth has been donning more snazzy plant garb from growing species diversity over many millions of years. Plants are the garments, animals and birds the jewellery.

The well-dressed earth swings through space majestically in its solitary fashion parade. Such a meaningful existence for the prettiest planet under the sun, if you asked the philosophers but what do they know! The procession, with the moon in attendance, is watched with interest from outer space by observers equipped with SKA and other telescopes, lightyears away.

At least, that was the plan and the progress all along! Among the diversification of animals that served the earth by dying in sufficient numbers for providing compost to grow clothes for the earth, an accident occurred. It took the form of a conceited species thinking for itself and of itself… and all was lost.

This crazy lot started scratching the soil, planting things all over the place, not in accordance with nature’s plan. As a consequence, rain and wind removed the soil to the sea. It remains without saying, untold consequences!

The people species, for that is what they call themselves, planted too much and ate themselves into obesity. They depleted species diversity like the extinction from an asteroid impact. They invented concrete and asphalt as ground covers and gases for cloud enhancement. This caused the continuous backyard to lose its front garden. And it stinks to high heaven, an earlier feature now perpetually retreating.

It all took on such awful proportions, that the place lost its appeal as housing for self-respecting insects. They now practise mass suicide. The green earth suit has been reduced to tatters. Rocky knees and elbows appear everywhere, shamelessly exposed; a truly despondent wreck of a body.

Fortunately, the news is that this people thing will soon blow over, although their numbers are in the interim escalating alarmingly in a final burst of technologically driven blind folly.

When this bothersome epoch is over, the earth will don a new coat, soothed under new leaves and another batch of animals, hopefully better behaved than the last lot.