Home » HABITAT » Habitat diversity » Undisturbed veld with Aloe ferox in the Little Karoo
Back to Category Overview
Total images in all categories: 11,451
Total number of hits on all images: 6,213,846

Undisturbed veld with Aloe ferox in the Little Karoo 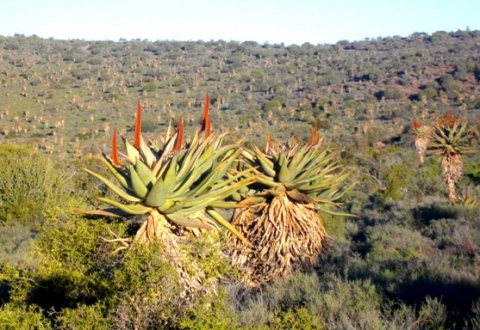 Human lifestyle had negligible impact on nature before the industrial revolution. Since then growth in human technologies and population numbers have destabilised nature on earth. Human lifestyle preferences are too often inconsiderate to the needs of our cohabitant species on earth. If we don’t stop crowding and polluting, the ecological processes we depend upon will be increasingly destabilised.

The risk of material loss has so far brought some efforts to reduce per capita impact, but not addressing uncontrolled human population growth. Neglect of unintentional outcomes of our novel technologies on nature has been particularly bad. Irreversible losses of species and resources must result if our numbers growth is not reduced, irrespective of how much per capita good behaviour we attempt.

The handed down spiritual attitude of deserving preferential treatment from God above other species established over many generations, started our bad attitude. Small scale ruthlessness to survive was initially natural in terms of habits of all species and not to be questioned. Human brain capacity gradually brought about imbalance in our favour; the advantage by which we annihilate species that get in our way with gay abandon.

The realisation that primitive communities respect nature better than sophisticated ones may serve as a telling lesson towards positive change. Change is needed, not really anticipated yet.