Home » HABITAT » Habitat diversity » Aloidendron dichotomum in the land of succulents
Back to Category Overview
Total images in all categories: 11,411
Total number of hits on all images: 6,178,621

Aloidendron dichotomum in the land of succulents 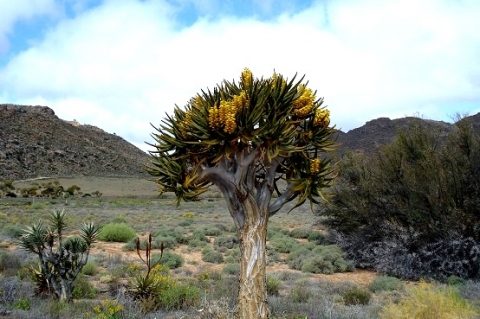 Tradition has it that Governor Simon van der Stel at the Cape of Good Hope was the first to write about the remarkable quiver tree. He saw it during his 1685 exploratory trip up the South African west coast. The Bushmen or San hunters he encountered here had long been fashioning hollowed Aloidendron dichotomum stems as quivers for carrying their arrows in hunts; hence the common name of quiver tree. These sentinels of the lonely semi-desert land serve as landmarks for travellers where there are no roads.

The low Namaqualand rainfall is associated with the cold Benguela current from Antarctica in the south. Little moisture is yielded into the air blown in over the land. Rainfall thus seldom exceeds 200 mm per annum, some regions getting less than half that. Early morning fog is common though. Day temperatures are high, over 40˚ C in summer and sometimes even 30˚ C in winter; but cold nights with frost are common.

Two more aloes can be seen growing nearby in the photo, while the scrub hides treasures of smaller to tiny xerophytic plants thriving in this habitat.

The Aloe genus has lost some of its members: The tree aloes are now in the Aloidendron genus, while some other South African aloes have been moved to the genera Kumara and Aloiampelos.

The region is famous for the annual flourish of flowers. Although the climate may be hard on the visitor in some other seasons, the succulents are worth seeing when the tourist rush is not there.

Many birds and insects will be attracted to these A. dichotomum flowers with their copious supplies of nectar. If they are not quick though, the baboons who are nectar consumers too will destroy the flowers when they feed on them (Coates Palgrave, 2002).

(See more entries on this Aloe in some other Albums of this Site by entering its name in the Search Box.)