Home » TYPES » Grasses » Setaria megaphylla growing densely
Back to Category Overview
Total images in all categories: 11,506
Total number of hits on all images: 6,515,958 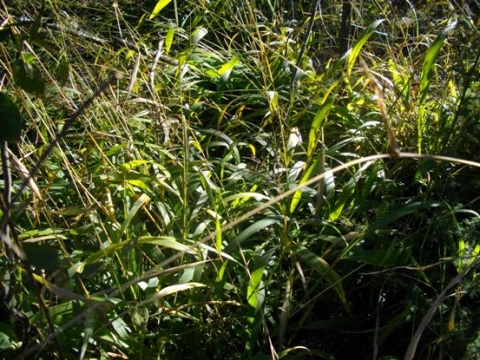 A stand of Natal buffalo grass, especially near water where it thrives, may be a dense affair; a good place for robust animals like buffaloes to dwell. The hollow culms (stems) become 2 m tall, occasionally 3 m. In nature large stands of this grass are not often seen.

In South Africa the species is distributed in the eastern coastal region and north of the Vaal River. Very cosmopolitan, Setaria megaphylla is widely distributed in tropical and subtropical Africa, as well as in warm, high rainfall areas of the Americas and India. The species is not considered to be threatened in its habitat early in the twenty first century (Lowrey and Wright, 1987; Van Oudtshoorn and Van Wyk, 1991; www.plantzafrica.com; http://redlist.sanbi.org).