Home » TYPES » Grasses » Pogonarthria squarrosa
Back to Category Overview
Total images in all categories: 11,506
Total number of hits on all images: 6,515,831 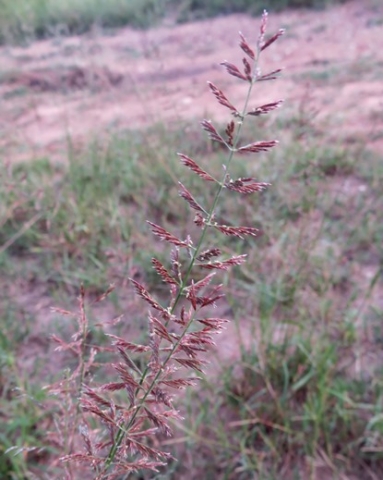 Pogonarthria squarrosa, commonly known as herringbone grass and in Afrikaans as sekelgras (sickle grass), is a tuft-growing perennial. It commonly reaches heights around 80 cm, occasionally 1,4 m.

The leaf blade becomes up to 5 mm wide with margins initially expanded, later rolled in and overlapping. The blade is hairless, rough on top, smooth below. The ligule or thin outgrowth at the junction of leaf and leafstalk is densely hairy.

The inflorescence consists of an unbranched stalk with regularly spaced, spike-like side-branches that may be straight but usually curve in (up) slightly in a sickle-shape. The spikelets are densely packed along the side-branches, brown in colour. The spikelet bracts are sharply pointed and overlapping. A spikelet becomes about 8 mm long.

The species distribution is in the northeast of South Africa, from North West, Free State and KwaZulu-Natal to the region north of the Vaal River and beyond. The photo was taken at Mjejane by the Crocodile River.

This is a relatively hard and unpalatable, pioneer grass often found in disturbed places. It is common in sandy and poor soil but may be found in about any soil type in grassland, savanna and Nama Karoo; usually an increaser grass. The species is not considered to be threatened in its habitat early in the twenty first century (Van Oudtshoorn, et al, 1991; Van Wyk and Malan, 1997; Lowrey and Wright, 1987; iNaturalist; http://redlist.sanbi.org).