Home » TYPES » Grasses » Phragmites australis and its many uses
Back to Category Overview
Total images in all categories: 11,506
Total number of hits on all images: 6,514,159

Phragmites australis and its many uses 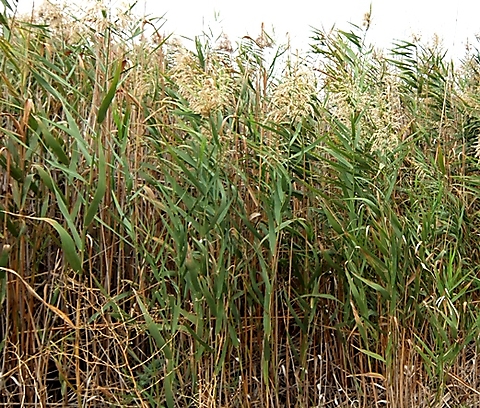 The tall, dense stands of Phragmites australis growing along the edges of dams and rivers are well-known in all South African provinces, also in Africa and elsewhere in the world, a truly cosmopolitan species.

The plants thrive in shallow rivers as well as standing vlei water, up to about 1 m deep and sometimes as a floating mat. It occupies estuaries, coping well with tidal salt water or in brackish marshes. The soil type is of no concern, as long as the water doesn’t disappear. No wonder that this plant’s survival causes no concern.

A related species, P. mauritianus, is found in the north and east of the country. An exotic, the Spanish reed or Arundo donax, growing thicker stems and broader leaves has also become abundant in parts of South Africa.

People forced to live where there is access to water are likely to discover many ways of using those plants that seek the watery sites. P. australis stabilises wetland soil against erosion and filters water.

People use fluitjiesriet for thatching, weaving mats and baskets for winnowing and storing grain. Boma walls and home ceilings from these reeds are still fashionable. Hunters made arrow shafts from the reeds in the past. For some this part of the past may not be quite over or irretrievable.

Smokers make pipes from the hollow reed stems, while some, including children, make musical instruments like flutes from leaves and stems. The rhizomes have apparently been a traditional source of starch, while a sweetener is obtained from the juices in young stems, reminding of sugarcane, another highly useful perennial grass.

It is or has been used variously in traditional medicine, but which South African plants have never been tried that way? Industrial uses exist in the chemical field and making paper from the plant.

Many bird species shelter and breed here, some mammals as well. This is an afterthought for people dominate the earthly scene for now (Vlok and Schutte-Vlok, 2015; Van Wyk and Gericke, 2000).