Home » TYPES » Grasses » Phragmites australis
Back to Category Overview
Total images in all categories: 10,851
Total number of hits on all images: 5,501,422 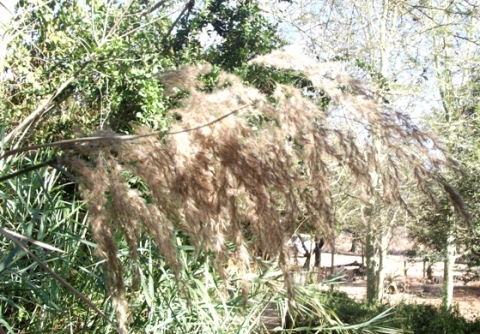 Phragmites australis, the common reed or in Afrikaans fluitjiesriet (little whistles reed), grows in wetlands throughout the temperate and tropical areas on earth. The split of Phragmites into three or four species does not seem to be generally accepted, some considering P. australis to be the only species of the genus.

This reed is common in vlei and floodplain areas, some rivers, estuary fringes and dams throughout South Africa, found in all provinces. The plant is a perennial grass of the Poaceae family, growing to heights of 3 m in damp ground or standing water of up to 1 m deep. In hot regions heights of 6 m may be attained. The species is not considered to be threatened in its habitat early in the twenty first century.

The plant spreads by creeping rhizomes or horizontal runners as much as 5 m per annum, reaching stands of a square km or more where the terrain allows. It puts down roots at regular intervals, becoming nearly impenetrable while excluding competing vegetation in areas where it is well established (Vlok and Schutte-Vlok, 2010; Wikipedia; http://redlist.sanbi.org).