Home » TYPES » Grasses » Pentameris curvifolia
Back to Category Overview
Total images in all categories: 11,544
Total number of hits on all images: 6,626,002 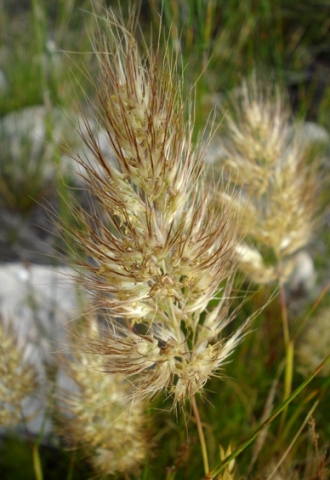 The leaves become 50 cm tall, the leaf margins sometimes rolled in, reflected in the curvifolia specific name. The flowering head is pale and dense, the awns long and purple in the photo.

This grass grows on shallow sandstone slopes of the Western Cape, Northern Cape and Eastern Cape, often in fynbos, but occurring in a variety of habitat types. The species is not considered to be threatened in its habitat early in the twenty first century.

Pentameris is a large and largely African genus, many of the species endemic to South Africa (Bean and Johns, 2005; Van Oudtshoorn and Van Wyk, 1991; http://redlist.sanbi.org).