Home » TYPES » Grasses » Fingerhuthia africana
Back to Category Overview
Total images in all categories: 11,539
Total number of hits on all images: 6,621,995 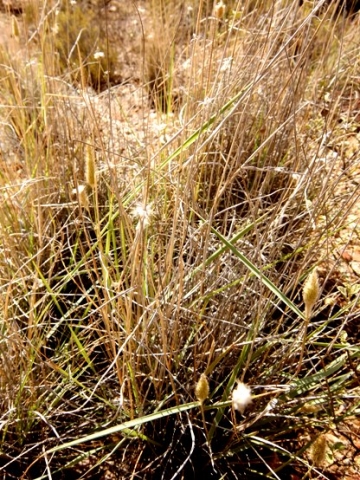 Previous
Image 8 of 79
Next

Fingerhuthia africana, commonly known as thimble grass, is mostly a perennial tufted grass, rarely an annual that reaches 90 cm in height. The plants spread through rhizomes, horizontal roots that spread and surface in new tufts a short distance from the main plant.

The species distribution covers much of South Africa, excluding parts of the southwestern Western Cape, the Kalahari, the east of the Eastern Cape and much of KwaZulu-Natal. The species also grows widespread in several neighbouring southern African countries.

The habitat is well-drained, sandy and gravelly soils, the plant often a pioneer on disturbed land. It favours hot, sunny areas, at home in biomes of savannah, grassland, Nama Karoo and succulent Karoo. The species is not considered to be threatened in its habitat early in the twenty first century (Van Oudtshoorn, et al, 1991; www.redlist.sanbi.org).