Home » TYPES » Grasses » Ficinia truncata, known as stargrass
Back to Category Overview
Total images in all categories: 11,417
Total number of hits on all images: 6,197,941 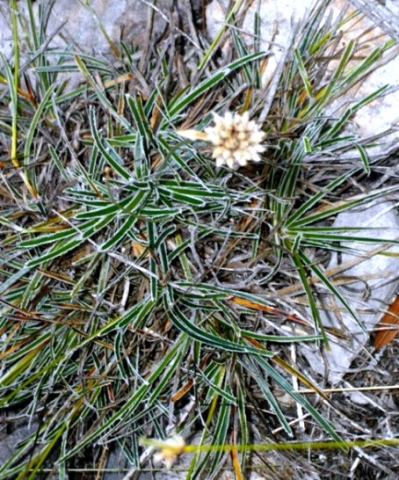 Previous
Image 7 of 79
Next

The flowers of Ficinia truncata found for this September photograph grow in dense star-like clusters or spikelets. They are blooming in the De Hoop Reserve on the southern Cape coast. It is this inflorescence that earns the plant the descriptive common name of stargrass.

The flower stalk is long, erect, smooth and green. The florets, usually chestnut-brown, are almost white here, maybe due to the timing of the photo. Some of these florets on the same spikelet are bisexual, others are male or empty.

The genus forms part of the Cyperaceae family and comprises about 60 species. Most of them occur in or are endemic to the Western Cape.

The distribution of this plant is near the sea in the Western Cape from Bredasdorp to Mossel Bay and in the Eastern Cape from Humansdorp to Port Elizabeth.

The habitat is coastal limestone slopes. The species is not considered to be threatened in its habitat early in the twenty first century (Manning, 2007; Bond and Goldblatt, 1984; http://redlist.sanbi.org).