Home » TYPES » Grasses » Ficinia on a rock in the southern Cape
Back to Category Overview
Total images in all categories: 11,894
Total number of hits on all images: 7,135,009

Ficinia on a rock in the southern Cape 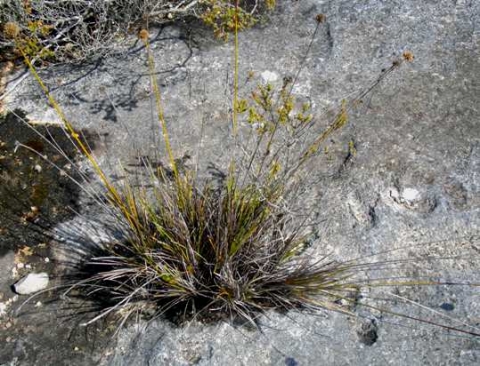 Previous
Image 5 of 79
Next

There are about 3200 species of sedges worldwide. They are rush-like or grassy perennials, commonly with underground rhizomes. Some of the South African species are woody at the base, others again have no rhizomes.

The two dominant South African genera of the family, Ficinia and Tetraria, usually grow in dry places, unlike the worldwide trend of the family, that is often found in swamps or cold regions.

Ficinia belongs to the Cyperaceae family's tribe of Scirpeae. The Ficinia genus is well represented in the Cape: 33 species grow in the Cape Peninsula alone, more than half the total number. This one was found flowering in September east of Bredasdorp. Note the shallow ground where it grows on the rock surface (Riley, 1963).