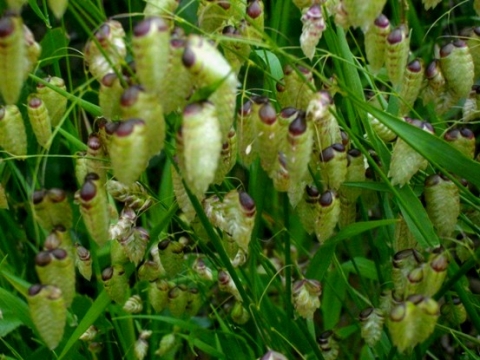 It is an exotic in South Africa, having been naturalised in parts of the Western Cape, Free State, Gauteng and Limpopo. The natural distribution includes the Mediterranean region, both in North Africa and southern Europe, as well as western parts of Asia. The plant has been cultivated or escaped in temperate zones of, among other places, the Americas, Australasia and the British Isles.

Common on disturbed land, but widely represented in grassland, savannah and fynbos, it is grazed although the foliage per plant and value as fodder are limited. The plant grows to 60 cm, sometimes in gardens and parks due to its ornamental features or vigorous characteristics as a weed.

The leaves are blue-green, the two to twelve conspicuous flowerheads per stalk pendulous and heart-shaped. The flowerhead is composed of overlapping scales, appearing in spring and summer (Van Oudtshoorn and Van Wyk, et al, 1991; Lowrey and Wright, 1987; Wikipedia).