Home » PARKS AND GARDENS » Goegap Nature Reserve » Didelta spinosa flowerheads at several stages
Back to Category Overview
Total images in all categories: 12,086
Total number of hits on all images: 7,387,099 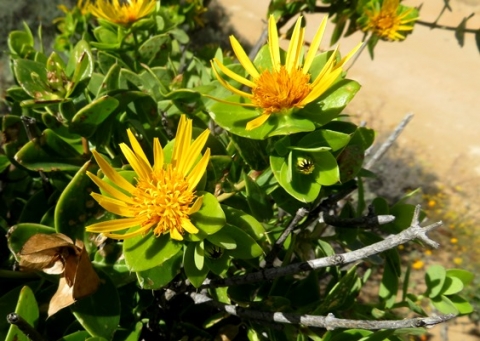 Flowerheads in different stages of development are present on the Didelta spinosa plant in picture.

In front to the right, a couple of buds are beginning to spread their ray florets. Their tips are still lengthening and gaining colour. In the centre two open yellow flowerheads face the sun, having reached the later stages of individual disc floret opening to the middle.

Further back, some heads still endowed with green bracts have lost their ray florets. In the front left there is a sagging flowerhead with bracts turned brown.

Beauty in nature has a purpose similar to marketing. Once this purpose has been fulfilled, nature has no incentive for sustaining it. Wasting energy on the unnecessary disappears through natural selection, as if evolution is a calculated and ruthless business process.

Whether any insect has ever shouted or thought: “You beauty!” when spotting a flower with promise is unknown. Beauty is for the mininal cognition class not abstracted and elevated to a feature admired for itself. As long as the flower promises value in the form of food, the attraction is singularly focussed on the potential functionality in need fulfillment for the insect.

Art functions among humans at either the concrete or abstract levels, sometimes both, differentiation between the two not always clearly established (Manning, 2009; Le Roux, et al, 2005; Manning and Goldblatt, 1997).