Home » PARKS AND GARDENS » Goegap Nature Reserve » Codon royenii flower
Back to Category Overview
Total images in all categories: 12,086
Total number of hits on all images: 7,387,248 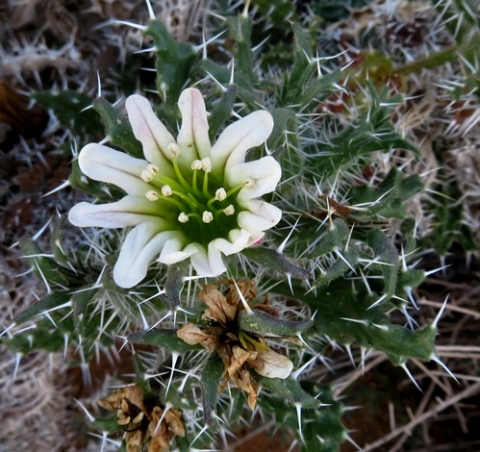 The corolla of a Codon royenii flower has longish oblong lobes that spread somewhat above a wide, cylindrical cup. The flowers produce copious amounts of nectar, earning the plant the common name of honey bush, a name that at first glance appears totally inappropriate. But there is a pleasant surprise waiting behind the hostile-looking, spiny front!

The filaments of the flowers are fused with the floor of the yellow-green corolla cup. Cavities among the filament bases fill up with nectar secreted by glands dedicated to the pleasing of pollinators.