Home » PARKS AND GARDENS » Goegap Nature Reserve » Aloidendron dichotomum, a tree of substance
Back to Category Overview
Total images in all categories: 12,086
Total number of hits on all images: 7,387,099

Aloidendron dichotomum, a tree of substance 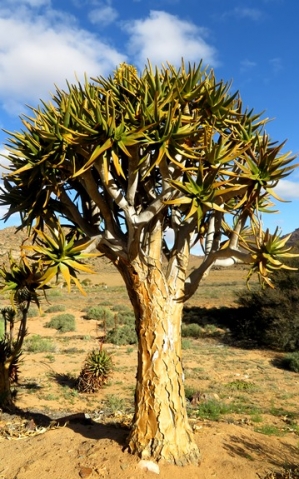 Previous
Image 5 of 31
Next

An Aloidendron dichotomum tree in its prime leaves no doubt as to its unrivalled status in its unique habitat. There isn’t much among indigenous plant species of Namaqualand that achieves its size and presence. Where that happens, it is usually on flats in deep soil where underground moisture is key to the achievement.

The quiver tree will reach 3 m to 5 m regularly, 7 m in special cases. It does this in the most unlikely spots in the Namaqualand veld. Inured to the harsh conditions it chooses slopes in hard ground with quick run-off and exposed brows of hills among rocks where no privileged conditions can be imagined.

The strongest competition or friendly neighbour, the two being the same in peaceful plant land, typically presents its tallest growth below knee level (Reynolds, 1974; Coates Palgrave, 2002).