Home » GENERA Q-S » Stapelia » Stapelia gettliffei
Back to Category Overview
Total images in all categories: 10,174
Total number of hits on all images: 4,832,131 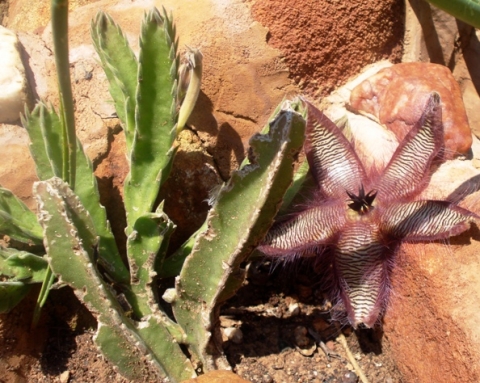 Previous
Image 4 of 38
Next

Stapelia gettliffei is a clump-forming stem succulent growing erect stems from short ground-level branches. Along the stem ridges large tubercles ending in leaf rudiments point upwards. These may vanish on older stems that become red in drought. The stems may be square in cross-section or the four green sides may be concave, their surfaces velvety pubescent.

Inflorescences of one to three flowers grow from near the base of young stems, the flowers developing successively. The flowers have long pedicels that turn the flowers to face upwards. The slender five-pointed star of the corolla is cream-coloured with purple, transverse lines across the lobes. Long, bushy hairs are present along the margins and in the centre. Flowering happens during summer and autumn into winter.

The species distribution in South Africa is in the North West, Limpopo and Mpumalanga. A large part of the distribution is outside South Africa in Botswana, Zimbabwe and Mozambique. The habitat is hot, dry bushveld where the plants are often found in partial shade. The species is not considered to be threatened in its habitat early in the twenty first century.