Home » GENERA Q-S » Senecio » Senecio maritimus
Back to Category Overview
Total images in all categories: 11,894
Total number of hits on all images: 7,136,585 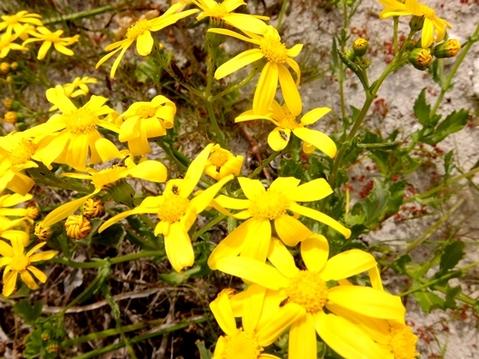 Senecio maritimus, in Afrikaans known as the strandhongerblom (beach hunger flower), is a sprawling to creeping and fleshy annual reaching heights around 30 cm. The specific name, the epithet maritimus, is derived from the Latin words mare meaning the sea and maretimus meaning of the sea or maritime, referring to the geographical distribution of the plants near the sea.

The species distribution is coastal in the Western Cape from southern Namaqualand to Caledon and the Agulhas region. The photo was taken at Tietiesbaai.

The habitat is dunes and rocky slopes. The species is not considered to be threatened in its habitat early in the twenty first century (Manning, 2007; Manning and Goldblatt, 1996; Bond and Goldblatt, 1984; Andrew, 2017; iNaturalist; http://redlist.sanbi.org).