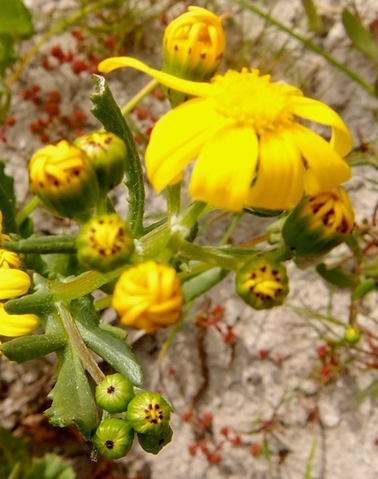 Different bud stages of Senecio maritimus position the maroon to blackish tips of the one row of involucral bracts in different positions. The base of the involucre is nearly flat. Its sides expand slightly upwards in a narrow conic section ending at the transforming tops of the developing buds.

The laterally rolled up rays of the half-open buds dominate initially, their finger-like, clasping temporarily resists the pressure of elongation until the still concealed disc pushes impediments aside (Manning, 2007; Manning and Goldblatt, 1996; Bond and Goldblatt, 1984; iNaturalist).