Home » GENERA Q-S » Senecio » Senecio anapetes
Back to Category Overview
Total images in all categories: 12,068
Total number of hits on all images: 7,363,124 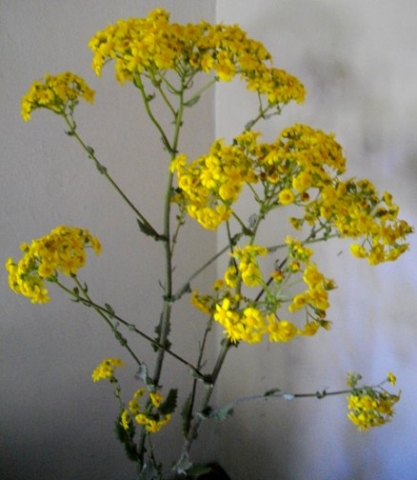 Previous
Image 2 of 81
Next

Senecio anapetes, commonly ragwort, is a branching perennial or herbaceous shrub that grows erect and spreading stems to 2 m tall. Previously called S. lyratus, although that name is also given to another, scandent species found in northeast Africa, particularly Somalia. S. expansus is yet another earlier name for this plant.

The rough-surfaced, longish leaves are laterally lobed, their tips tapering. The small yellow flowers grow in large, many-flowered panicles that are somewhat flat-topped. Each flowerhead has one whorl of between six and twelve small ray florets around a small cluster of yellow disc florets. Flowering lasts long, from spring through autumn.

The species is a South African endemic found in the Western Cape from Clanwilliam to the Cape Peninsula, Caledon and further to the east, maybe to the Eastern Cape. The habitat is moist flats and slopes. The plant is not considered to be threatened in its habitat early in the twenty first century (Bond and Goldblatt, 1984; iSpot; www.redlist.sanbi.org).