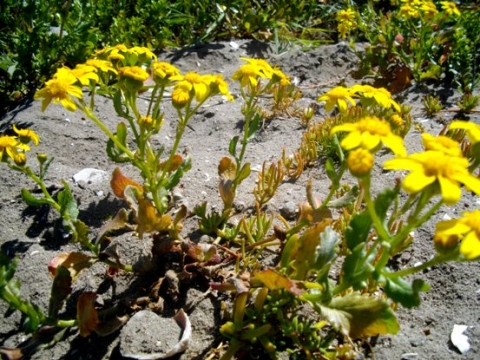 Senecio littoreus var. littoreus, in Afrikaans the geel hongerblom (yellow hunger flower), is an erect annual herb that grows to 40 cm on coastal sands. The branched stems have few short hairs. Leaves are basal or alternate and smaller up the stems. Leaf shape is lanceolate to oblong with toothed or shallowly lobed margins.

The coastal distribution of S. littoreus ranges from Namaqualand to the southwestern Cape. The species is not considered to be threatened in its habitat early in the twenty first century.

S. littoreus var. hispidulus is only found in the western parts of the species distribution from the Cape Peninsula to around Saldanha. S. littoreus var. littoreus also grows more to the east, including the Caledon and Walker Bay areas. This plant was seen near the beach at Vermont during October (Manning, 2007).