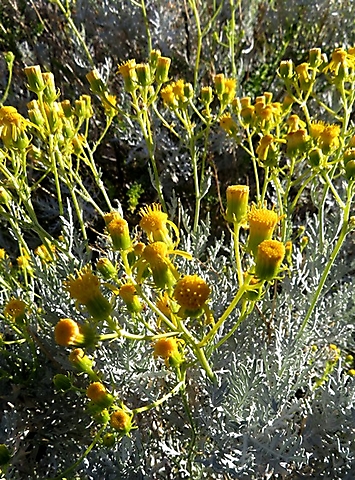 Senecio is a genus of annuals, perennials, subshrubs, shrubs, small trees and climbers in the Asteraceae or daisy family. The plants differ much in habit.

The simple leaves are alternate and sometimes stalked. Leaves sometimes grow from the stem-base as if directly from the ground, in some other species reducing in size up the stems. The blades are mostly pinnately veined. The leaf margins may be entire, toothed or lobed. Leaf bases sometimes have ear-like lobes. Most species don’t have stipules at the leaf or petiole base.

The flowerheads grow solitary or in cyme- or corymb-shaped inflorescences. Involucres mostly have one row of united or cohering bracts, rarely two. The involucres are cup-shaped, cylindrical, bell-shaped or hemispherical. The receptacle at the involucre base is flat or convex, without scales but sometimes pitted. There is also a row of small bracteoles at the involucre base, as well as a few bracts on some peduncles, while one is usually present below each peduncle bases.

(Female) ray florets are present in some species around the yellow discs that are always there. The disc comprises numerous bisexual, tubular florets, each ending in five lobes. Ray colours are mostly yellow but some species bear pink, purple, violet or rarely white ones.

Some of the disc florets in certain species are functionally male. The anthers bear appendages at their tips and are sometimes tailed, the filament collars dilated. The style is branched, the thread-like branches sometimes ending in hairy crowns.

The dry fruits or cypselas that follow are ellipsoid, obovoid or cylindrical with ribs and sometimes short, appressed hairs. There is a pappus attached to the cypsela, consisting of fine or slender bristles, not always lasting long.

There are about 1250 Senecio species, very widespread on earth, mostly in Africa, South America and Australia. Southern Africa has about 300 species.

A tea is brewed from some plant parts, while several species feature in traditional medicine. The Afrikaans common name of hongerblom (hungry flower) for a couple of senecios refers to their use in promoting appetite. Some species are toxic to livestock and some become weedy. Few species are browsed by game or stock.