Home » GENERA Q-S » Senecio » Senecio arenarius
Back to Category Overview
Total images in all categories: 11,662
Total number of hits on all images: 6,774,649 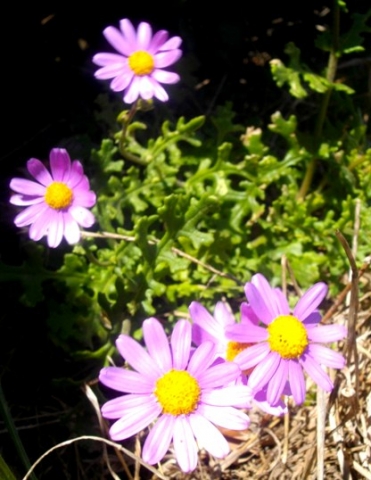 Previous
Image 4 of 71
Next

Hongerblom flowers and leaves can be observed in this photo taken near the beach west of Hermanus at the end of summer. The involucre of Senecio arenarius is made up of just one row of bracts as is common for Senecio flowers.

The hongerblom name is derived from the use of the leaves to make a tea that is supposed to stimulate appetite. Hongerblom tea really makes people hungry? The leaves of some other Senecio plants share this usage. Hoodia to slim, Senecio to fatten!

The enigmatic name, meaning hungry flower, was chosen by Afrikaans author, Hennie Aucamp as title for one of his literary works. An unfulfilled maiden might be thought of as a hongerblom (Manning, 2007; Wikipedia).