Home » GENERA Q-S » Senecio » Senecio arenarius
Back to Category Overview
Total images in all categories: 12,068
Total number of hits on all images: 7,360,802 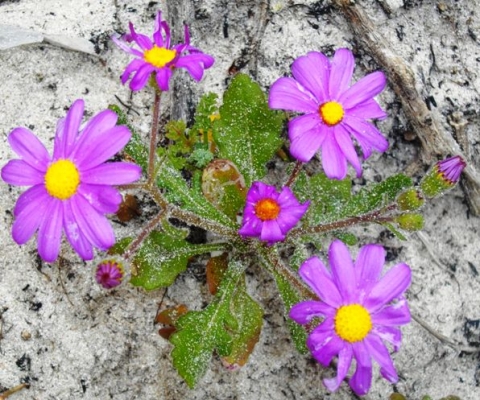 Previous
Image 3 of 81
Next

This young Senecio arenarius plant found in the De Hoop Nature Reserve in September displays a basal leaf rosette in close relationship with the dune sand in which the plant sprouted. Grains of sand are caught among the gland-tipped leaf surface hairs as well as on the equally hairy stems and the cup-shaped involucres.

The annual herb may yet gain many smaller leaves higher up as it matures before it fruits, seeds and disappears by autumn. The paddle-shaped leaves have margins with rounded teeth, pointed scallops or small lobes. The leaf bases may be describes as attenuating or have narrow, winged petioles, whichever description is preferred.

The disc flowers have lost their yellow colouring on the faded flowerhead low down on the stem, becoming orange. Mauve conic sections of neatly cohering ray florets are seen on the buds nearing the moment of opening. Open flowerheads may have spreading or partly reflexed ray florets.

The plants occur widespread along the west coast in the Northern Cape and the Western Cape as far as Bredasdorp; also in Namibia. The habitat is sandy flats in the winter rainfall region. The species is not considered to be threatened in its habitat early in the twenty first century (Manning, 2007; Le Roux, et al, 2005; Manning and Goldblatt, 1996; http://redlist.sanbi.org).