Home » GENERA Q-S » Senecio » Senecio abbreviatus
Back to Category Overview
Total images in all categories: 11,779
Total number of hits on all images: 6,931,722 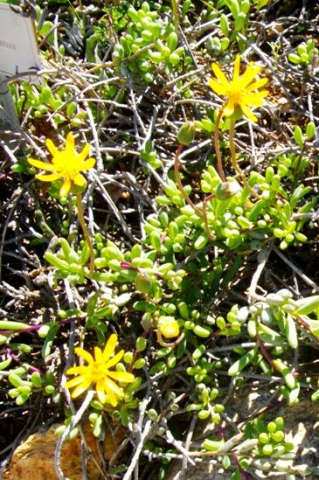 Previous
Image 1 of 73
Next

Senecio abbreviatus is a spreading succulent. Its leaves resemble those common among the Aizoaceae or vygie family, but the flowers place it in the Asteraceae or daisy family.

Plants are more likely to be classified on flower and seed characteristics than foliage features, although many plant names refer to leaf, hairs, colours or other attributes. Names may reflect notable descriptors for easy identification, but family reflects ancestry and relationship.

S. abbreviatus is found in the Mossel Bay area where it is known in Afrikaans as rankvingertjies (little twining fingers). The plant in the picture was found flowering in the Karoo Desert National Botanical Garden during August.