Home » GENERA I-L » Leucospermum » Leucospermum wittebergense flowerhead
Back to Category Overview
Total images in all categories: 11,451
Total number of hits on all images: 6,213,961 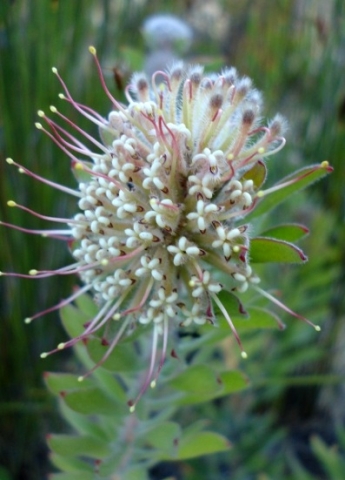 The flowerhead of Leucospermum wittebergense starts off cream coloured. As the pink or carmine pollen presenters escape from the cover of their four-segmented perianths, straightening up and taking the pollen with them, they lend the pinkish appearance to the flowerhead. This pincushion blooms from late winter to summer.

The fully opened perianths show all four segments recurving downwards, beside the erect and much longer style, tipped by the pollen presenter. The style becomes 1,2 to 1,9 cm long (Bond and Goldblatt, 1984; Vlok and Schutte-Vlok, 2010).