Home » GENERA I-L » Leucospermum » Leucospermum wittebergense with old flowerheads
Back to Category Overview
Total images in all categories: 11,451
Total number of hits on all images: 6,213,803 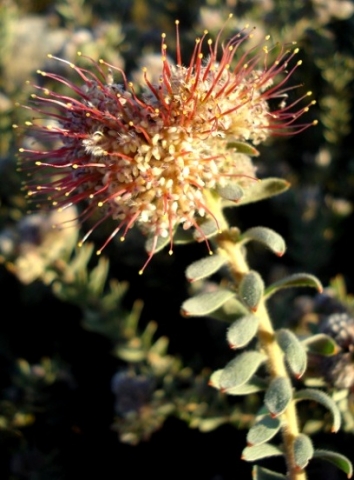 Leucospermum wittebergense, the Swartberg pincushion, is botanically named for a white mountain, while its common name relates the plant to the Swartberge (black mountains). This is not one of those almost inexplicable South African expressions like ja-nee (yes-no)! The plant’s distribution does include both the Swartberge, the Witteberg and also the Kouga Mountains. Some have even been found on the Outeniqua Mountains in the south. The habitat is rocky slopes of fairly dry Protea fynbos areas with temperature extremes.

In this photo of a plant growing near Oudtshoorn, the clustered flowerheads crowding the stem top are past their prime. The perianth segments below are still creamy white, becoming misshapen as they wither. Some of the hairiness that showed on the segment exterior surfaces is notable again from mutilation of the withering segment tips. Elsewhere the hairless upside down U-shaped curves of the inside surfaces of segments are still showing.

The pollen presenters have now mostly performed both their functions: firstly the pollen transfer task they were named for, while the stigma was still immature. The second duty of the stigma itself receiving pollen from another flower, is done when the style is withering. This ensures seed production in its own ovary below (Bond and Goldblatt, 1984; Vlok and Schutte-Vlok, 2010; www.proteaatlas.org.za).