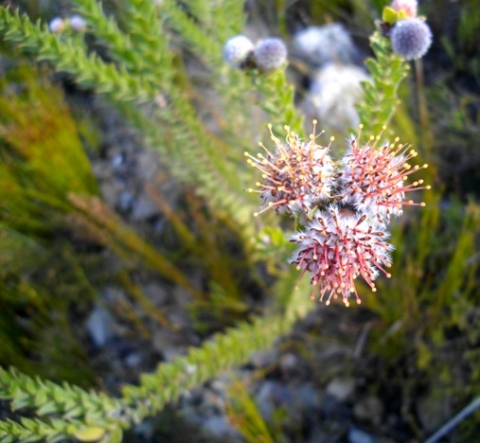 This sparsely branched young Leucospermum truncatulum plant shows flowerheads in two stages: those budding and others ready to fade. Each cluster has two or three flowerheads at similar developmental stages at its stem tip. On another plant a diverse mixture of flowering stages may occur together, presenting several shades of pastel coloured flowerheads. This may comprise pale yellow, cream and pink to different hues of orange and nearly red.

L. truncatulum plants may commence flowering at heights near 45 cm, when they are quite young and have only a few branches. A flowerhead may measure 2 cm across. In nature these plants are only found in the far southwest of the Western Cape between the Kogelberg and Swellendam and southwards to near Cape Agulhas, growing on fynbos slopes and flats.

The species is considered as being near threatened early in the twenty first century. More than a quarter of its natural distribution area has been taken by agriculture over the last 60 years; and more before that (Eliovson, 1973; Bond and Goldblatt, 1984; www.plantzafrica.com).