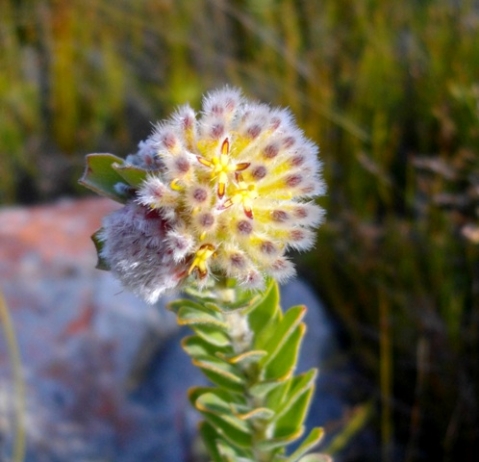 The flowerhead of Leucospermum truncatulum depicted in this photo shows some interesting processes underway. It has lost the flat-topped phase, becoming more globular as it approaches maturity. This is achieved by the originally narrow individual perianths swelling out at the base and pushing each other outwards, getting distance among their tips and assuming a globose flowerhead shape. The perianths become more colourful; when open they will fill the spaces between the styles with their recurving ribbon-like lobes.

The first bent yellow styles can be seen slipping out from their perianths as the lobes, originally attached to each other, begin to split apart for releasing the laden pollen presenters to the pollinators. Some opening flowers of the head are caught in interesting stages of this process. On the left of the main flowerhead in view, a younger white woolly one still has a cylindrical, flat-topped shape.