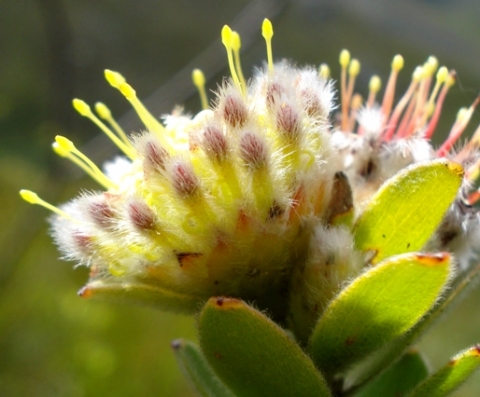 There are far too many photos of Leucospermum truncatulum in this Album already! The subject is, however, almost inexhaustible.

From a distance this plant, bearing flowerheads smaller than most Leucospermum species, may be deceiving to the observer who has not made its acquaintance yet. Stop and look again! It presents something strikingly new in its pastel colours, softly and strongly drawn lines and structural variety in the metamorphosing flowerheads.

Thin, coloured, arrowhead-like styles in picture stand above the hairy matchsticks, the buds still to open. Each overgrown single apical tooth at a leaf tip is dark above its short orange rim, synthetic looking like rubber or plastic; an unlikely feature on an otherwise very normal-looking yellow-veined leaf, covered in soft pubescence (Matthews and Carter, 1993).