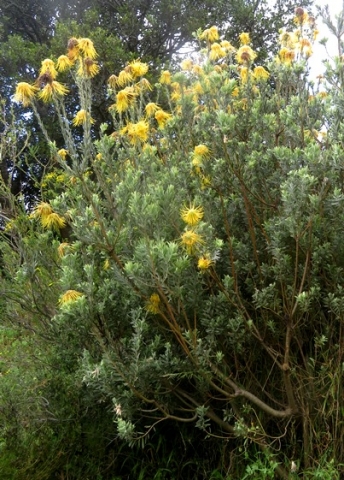 Leucospermum reflexum var. luteum, the yellow-flowering variety of the rocket pincushion or in Afrikaans the perdekop (horse head), is a large, rounded, grey-leaved shrub, growing from a single, woody stem and reaching heights to 3 m, occasionally 5 m. The lowest, smooth, grey stems are leafless.

The distribution of this variety of L. reflexum is even smaller than that of the red-flowering variety. This one is only known from a small area in the Cederberg near Heuningvlei.

The plants grow near streambanks and other moist places on upper slopes in the generally hot and arid sandstone fynbos. L. reflexum as a species without reference to this, its smaller variety, is considered to be near threatened in its habitat early in the twenty first century, mainly due to rooibos farming and drought (Manning, 2009; Coates Palgrave, 2002; Bond and Goldblatt, 1984; http://pza.sanbi.org; http://redlist.sanbi.org).