Home » GENERA I-L » Leucospermum » Leucospermum prostratum
Back to Category Overview
Total images in all categories: 11,905
Total number of hits on all images: 7,155,943 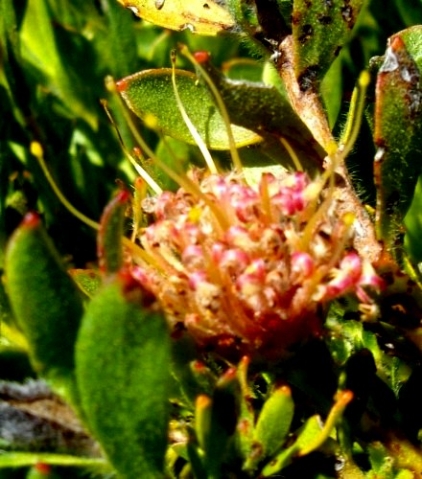 Leucospermum prostratum, the creeping pincushion or yellow trailing pincushion, is a mat-forming shrub that grows many stems that do not branch. A bush may become 4 m wide. The stems emerge from the sturdy underground rootstock that makes the plant a resprouter after fire.

Stem-tip clusters of up to three brightly yellow flowerheads, sweetly fragrant and spherical, appear from midwinter to early summer. A flowerhead is up to 2,5 cm in diameter, ageing to an orange colour.

The species distribution is from Rooiels and Caledon to the Elim Flats near Bredasdorp where it grows on sandy coastal flats. The species is considered to be vulnerable from considerable habitat loss, expected to continue early in the twenty first century (Privett and Lutzeyer, 2010; Bean and Johns, 2005; www.plantzafrica.com; www.redlist.sanbi.org).