Home » GENERA I-L » Leucospermum » Leucospermum oleifolium
Back to Category Overview
Total images in all categories: 12,081
Total number of hits on all images: 7,379,260 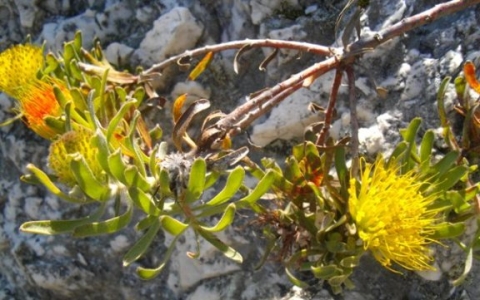 The Overberg pincushion has smaller flowerheads than several of the other members of the genus. Nevertheless, they are attractive, seen close-up here or en masse when a large bush is in full flower.

Leucospermum oleifolium has been described as a miniature version of L. praecox, the Mossel Bay pincushion. The latter also has tufted flowerheads that are yellow in colour when young, changing to orange or red later.

The seeds of this plant are dispersed by ants that carry them to their nests as food. The vital parts of the seed are not eaten or harmed though and germinate when the ants have carried them out again and conditions become favourable (Eliovson, 1967; www.protea.worldonline.co.za).