Home » GENERA I-L » Leucospermum » Leucospermum gracile
Back to Category Overview
Total images in all categories: 12,081
Total number of hits on all images: 7,379,549 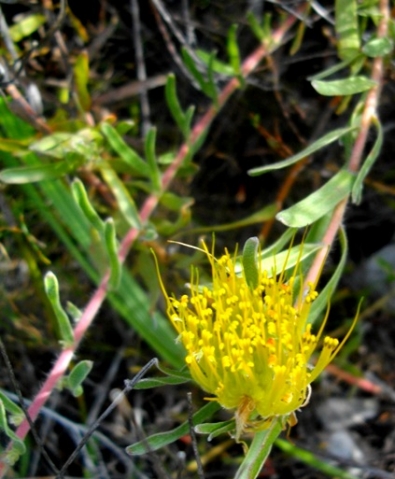 Leucospermum gracile, the Hermanus pincushion, is a sprawling, mat-forming shrub that is low in growth habit, but may measure 1,5 m across. The plant is a reseeder, growing from a single stem.

The narrow, oblong leaves are sparsely hairy and pale green to grey-green on reddish stems. In picture they appear slightly channelled, the margins turning up. Glandular teeth are usually present at the leaf tips, from one to three of them. Leaf dimensions are 2 cm to 4,5 cm by 2 mm to 5 mm.

The species distribution is from Caledon and the Kleinrivier Mountains next to Hermanus to Bredasdorp. Part of the distribution towards Botrivier may have been lost.

The habitat is mainly south facing lower slopes, but to a lesser extent also higher, north facing slopes, up to 1200 m. The plants form part of fynbos, growing in well-drained sandy soils. The species is considered to be near threatened in its habitat early in the twenty first century (Bean and Johns, 2005; Marais (Ed.), 2017; Bond and Goldblatt, 1984; iSpot; www.redlist.sanbi.org).