Home » GENERA I-L » Leucospermum » Leucospermum
Back to Category Overview
Total images in all categories: 10,366
Total number of hits on all images: 5,071,752 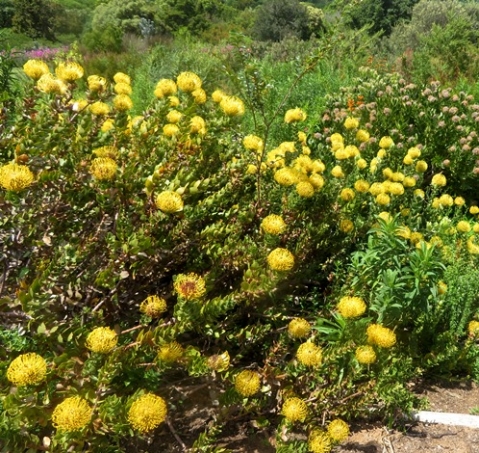 Leucospermum is a genus of 48 species of shrubs and trees that may be erect, decumbent or sprawling. Some are single-stemmed, others resprout from underground rootstocks.

Generally known as pincushions on account of the erect pollen presenters protruding from the open flowerheads, the genus is easily recognisable. The Afrikaans name of luisiesbos (little lice bush) refers to the small, style-tip bulges, the pollen presenters, variously shaped in the different species.

The flowerheads contain at least 15 florets, often many more. They grow solitary or in clusters from leaf axils or at stem-tips, with or without stalks. The involucral bracts are small, green, papery or cartilaginous. The receptacle at the flowerhead base is flat, globose, cylindrical or conic, depending on the species.

The bisexual flower or perianth covering a style, starts off as a cylindrical, hairy bud. The four perianth sections have the anthers inside their tips for depositing pollen on the unripe pollen presenters at the style tips when they part. When this happens, the perianth sections recoil down into the flowerhead base, while the style straightens or arches upright after elongating forcefully to break free. The pollen is deposited from the anthers in the perianth tips onto the pollen presenter.

The slender ovary at the base of each perianth contains one ovule. The fruit is an ovoid to cylindrical achene.

The plant in the photo is the Leucospermum cordifolium “yellow bird” cultivar (Manning, 2007; Leistner, (Ed.), 2002; Wikipedia).