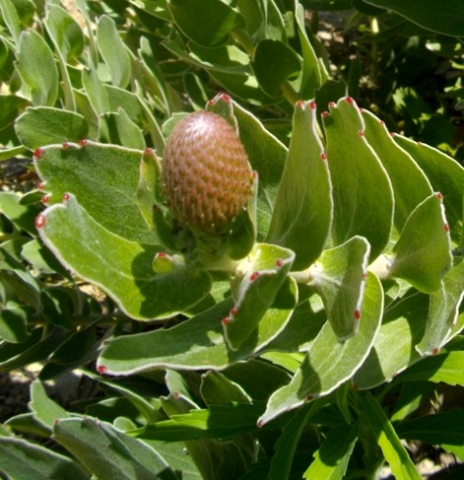 The stem tip bud of a Leucospermum cordifolium flowerhead at this stage looks like a woolly knob, the details of the emerging individual flowers that comprise it arranged according to numbers in a Fibonacci series.

Snowy at its tip, this bud is already pretty although not as much noticed by either human flower lovers or the plethora of prospective nectar users.

At the angular leaf tips several glossy red apical teeth are spaced like beads along the whitish upper margins. Faint hairiness of a velvety nature as well as pale leaf midribs and lateral veining are visible upon the leaf surfaces. The leaves, roughly oval but variable in shape, are sessile. A leaf may be anything from from 2 cm to 8 cm in length (Matthews and Carter, 1993; Manning 2007).