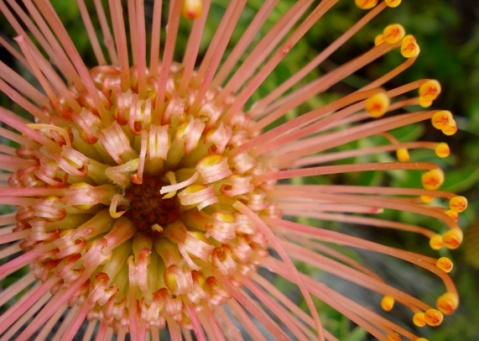 At close range a Leucospermum cordifolium flowerhead assumes the appearance of an ornately decorated, spoked wheel fit for some mythical carriage that might move through the sky on mysterious travels. (What did Apollo drive?)

The pinkish styles curve towards their yellow club-like stigma tips, adorned by orange slits where grains of pollen should enter. The tightly curled up perianth segments, by now devoid of the pollen they had smeared upon the stigmas, the pollen presenters, are now purely decorative in their shiny coils, lying at the base of each style. Earlier they were vital, when splitting open and brushing off their valuable loads upon sticky stigma surfaces.

The gap in the flowerhead centre, where some individual flowers have not developed, holds some rudimentary floral beginnings at its base (Matthews and Carter, 1993; Manning 2007).